A brief look at the history of EUIT

Terrassa University School of Nursing and Occupational Therapy (EUIT), is rooted at the beginning of the 20th Century. Following the typhus epidemic of 1914, the flu epidemics of 1916 and 1918 and the arrival of the wounded from the Rif War, the Government felt it was important to improve the country’s healthcare conditions and attend the needs of the sick, wounded and convalescent.

At that time in Spain, nurses did non-formal training in hospitals and emergency shelters, and so the Red Cross created the Women’s Nurse Corps. Queen Victoria Eugenie of Battenburg as a representative of this corps, promoted the beginning of professional training for nurses.

In 1916 the War Ministry (Ministerio de Guerra) approved a change to its regulations in order to develop basic training. In 1918, the first course of 35 classes began on the hospital premises. By 1920, at Barcelona’s new Red Cross hospital, this widened to a two-year academic course in order to complete a professional nurse’s training. 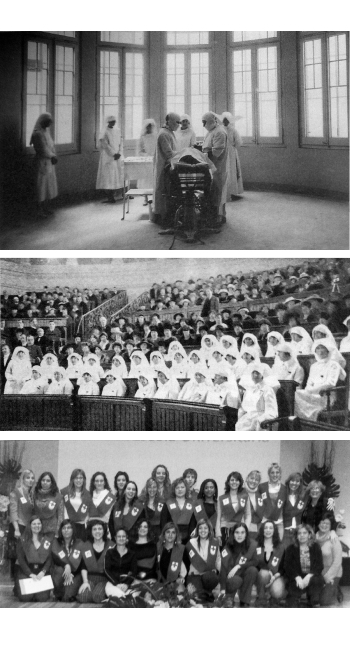 By means of the Act of 1952 by the Ministry of National Education (Ministerio de Educación Nacional), starting from the academic year of 1954-55 the school was permitted to train nurses as Technical Healthcare Assistants (Ayudantes Técnicos Sanitarios -ATS).

The Royal Decree (Real Decreto) 2128/1977 allowed nurses to study a University Diploma in Nursing (DUI).  This change placed the continuity of Nurses training at the Red Cross School in risk, until the Universitat Autònoma de Barcelona (UAB) agreed to go into a joint venture with the Red Cross School.

The first DUI course meant moving the school to the Passeig de la Reina Elisenda de Montcada in Barcelona.  In 1986 the course was moved once again to the Avenida de Vallvidrera, until in 1990 is was moved permanently to Terrassa. It was moved to number 90 in a building offered by the Sant Llàtzer Foundation on Carrer de la Riba.  In 1993, once situated in this area, the University Diploma in Occupational Therapy was first offered. It was then, the first University School in Catalonia to teach this degree.

The European Higher Education Area (EHEA) (Bologna, 1999), meant that starting from 2009-10 the university courses became Undergraduate Degrees. Therefore leading to the first graduates with undergraduate degrees in Nursing and Occupational therapy in June 2013.

On the first of October 2012, the Red Cross University School joint the Sant Llàtzer Teaching Foundation, in the Healthcare Network of Terrassa (Grupo de Consorci Sanitari de Terrassa -CST), in order to strengthen the university project.

This brief history of the Escola Universitària d’Infermeria Ocupacional de Terrassa allows us to recognise our past, as well as the people who have made the current setup of the school possible. That being, a university offering two undergraduate degrees with highly-qualified staff members.

This website uses cookies to improve your experience while you navigate through the website. Out of these, the cookies that are categorized as necessary are stored on your browser as they are essential for the working of basic functionalities of the website. We also use third-party cookies that help us analyze and understand how you use this website. These cookies will be stored in your browser only with your consent. You also have the option to opt-out of these cookies. But opting out of some of these cookies may affect your browsing experience.
Necessary Always Enabled
Necessary cookies are absolutely essential for the website to function properly. This category only includes cookies that ensures basic functionalities and security features of the website. These cookies do not store any personal information.
Non-necessary
Any cookies that may not be particularly necessary for the website to function and is used specifically to collect user personal data via analytics, ads, other embedded contents are termed as non-necessary cookies. It is mandatory to procure user consent prior to running these cookies on your website.
SAVE & ACCEPT

You can find out more about which cookies we are using or switch them off in settings.

This website uses cookies so that we can provide you with the best user experience possible. Cookie information is stored in your browser and performs functions such as recognising you when you return to our website and helping our team to understand which sections of the website you find most interesting and useful.

Strictly Necessary Cookie should be enabled at all times so that we can save your preferences for cookie settings.

If you disable this cookie, we will not be able to save your preferences. This means that every time you visit this website you will need to enable or disable cookies again.

This website uses Google Analytics to collect anonymous information such as the number of visitors to the site, and the most popular pages.